Sopor Aeternus and the Ensemble of Shadows 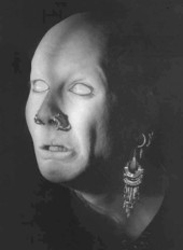 Tabor C'alan O'itana (My Womb is barren, but I can conceive) - To ti je a national acrobat

After their brilliant album ╗Les Fleurs du Mal½ SOPOR AETERNUS &
THE ENSEMBLE OF SHADOWS are now returning to complete their
curious study with this equally emotional sister/release
╗SANATORIUM ALTROSA û Musical Therapy for spiritual
Dysfunction½. Let us carefully open the beautifully designed
pages of the strange brochure of this ╗SANATORIUM ALTROSA½ now,
and risk a brief look at the wonderful music we are being
offered here: First up we have an instrumental version of
╗Consider this: the true meaning of Love½, a rather powerful
neo-classical track with heavy, almost Germanic sounding
military drums and energetic strings sections, that finds its
resolution in the arrival of a funeral procession. This most
skillful introduction is followed by ╗Architecture II½, a track
somewhat reminiscent of early DEAD CAN DANCE (but with a lyrical
content way beyond what Brendan and Lisa ever dared to offer).
The old crow of ANNA-VARNEY CANTODEAÆs versatile voice is
floating in rivers of reverberation, accompanied by the
omnipresent ensemble of brass, strings, woodwinds and drums, and
an all male choir, that (to the end of the song) is hilariously
chanting away on the phenomenon of unexpected orgasms brought on
by the sexual powers of a certain (yet unnamed) characterÆs dark
charisma. The third track is a remix of ╗Shave, if you love me½,
followed by an instrumental edit of ╗La Mort dæArthur½, the
former being actually quite different from the album-version,
and the latter turns out to be weirdly joyful, even without the
innocent choir-boys in it. Track number five is the original
version of ╗Consider this½, this time with AVCÆs screaming
vocals on top of it, supported by forceful drum-parts, fragile
Asian instruments and lots of electronica. With the instrumental
piece ╗The Conqueror Worm II½ we reach the centre of ╗SANATORIUM
ALTROSA½, a track that might best be described as a classical,
string-based celebration of death and decay in all its glory.
Definitely one of the many highlights of this most peculiar
release. The warmth and enchanting beauty of the instrumental
version of ╗In der PalΣstra½ bridges the abyss to the sheer
terror of ╗Collision û you may lie on your back, if you want to
... even close your eyes to sleep½. This monster of a title is
also a true monster of a track, evoking a rather sudden change
of atmosphere. In fact, it is such a contrast to the previous
track(s) that it comes as quite a shock to the unexpecting
listener. The music is now extremely dark and unsettling, with
more than a touch of insanity woven into it, forcing us to
witness the wretched spectre of shame and homoerotic necrophila
returning from the ancient vaults. This track is certainly ôback
to the rootsö à and even far beyond! The following instrumental
edit of ╗Les Fleurs du Mal½ is therefore a most welcome relief
from all this horror, literally feels like a stroll through the
high grass of a lovely meadow on a warm summerÆs evening. The
likewise instrumental treat of ╗Bitter Sweet½ is both poetic and
wild, a pendulum swinging to and fro beween the sweet softness
of a gentle harp and the frantic sound of a high-pitched violin
combined with powerful rock-drums. Completing the magick circle
is another version of the marvellously orchestrated ╗Consider
this: the true meaning of Love½. Here ANNA-VARNEY is basically
screaming her lungs out in this most painful lamentation, a
heartfelt plea for medically assisted suicide, the universal
human right for euthanesia. The dramatic choirs accompany her
cries of agony and frustration, as she fiercely gives the
illusion of any romantic Love a damn hard slap in the sometimes
all too rosy face! -- And with the sombre toll of the funeral
bell à all comes to a quiet end.